I always thought Christmas cribs could be more interesting than the traditional Jesus-in-the-manger ones we see most often. I myself never really did anything different for several years with the crib at my home. Last year, I finally decided to take the plunge, giving an ice age look to the nativity scene.

This time around, the science fiction fan in me was kicked with the idea of a space age theme. Found myself flooded with ideas – astronauts, aliens, planets, comets and all things astronomical. I realized soon enough, that while I may be good at conceptual thinking, implementing ideas is a different task altogether. Once I had done a reality check of my creative abilities, I decided to limit myself to making the astronauts and a rocket.

Okay, so now I had decided on having an astronaut. (That seemed to be the one thing that would give the crib a space-age look to a non SF geek.) Toyed with the idea of using plastic bottles, vials and all other sorts of containers (suggestions courtesy Marise). Reminded myself that I had never did anything of this sort before, and did not have the time to experiment now. So I google up ideas for the astronaut and find a surfeit of do-it-yourself methods for our spaceman. None of them still looked right, so the plan was in limbo for a few days. Somewhere on the weekend before Christmas, I thought of using modeling clay. Eureka! Rushed on the net again and found some cool pics of clay modeled astronauts. 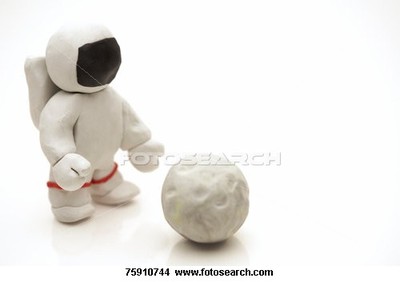 Now that I knew what was to be done, I threw myself into the activity. Made a crude model, and was exceedingly happy with the result, given that it was my debut at clay modeling J. When the euphoria had sunk in, I got more ambitious and made two spacemen with elaborate spacesuits. 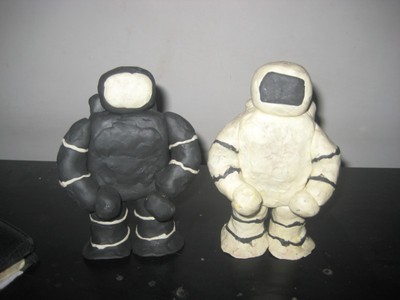 With the astronauts out of the way, I got going on the rocket. This turned out to be tougher than the previous job. The base had to be strong enough to hold the weight of the statues, so I used two cardboard pieces with toothpicks as reinforcement between the two sheets.

The shaft involved some experimenting – paper could not hold the cylindrical shape together for long, and cardboard is too stiff to curve. Had to do with cardboard though, with some help from my Dad. Used card for the nose cone, and covered the whole thing with glazed silver paper. Used plywood strips for the fins, covered with a bold red.

Here’s how the Space Age Crib looked. Am quite proud of my first time effort 🙂 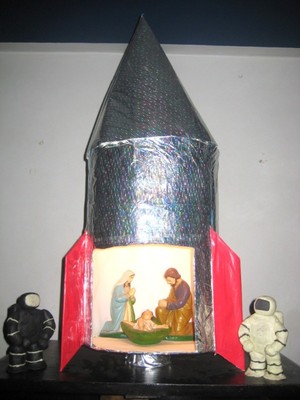